Movember is all about moustaches and raising awareness about prostate cancer. My friends have been growing their moustache for several weeks, sporting their facial pilosity with pride. But how could I participate? Crocheting one, of course.

My all-time favorite composer and guitarist is Frank Zappa. He is one of the most prolific musician I know, releasing over 60 albums during his 33 years of musical carrier. He is also well known for his iconic moustache. Here it is : 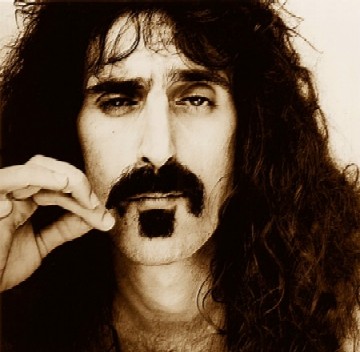 Sadly enough, he died from prostate cancer at the young age of 52. I felt I had to pay a tribute to him for our annual moustache contest (the JIMM : Journée Internationale de la Moustache Montréalaise, not originally related to Movember, but we moved it to November to show our support).

This year, we had a props category for the persons who can’t biologically grow a moustache (mostly girls, in our case), and guess what… I won! Here is the picture from the competition. 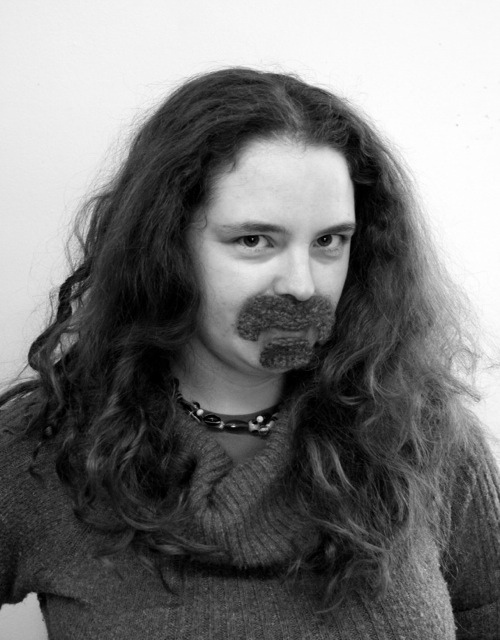 This is not much of a pattern, but more some kind of guideline to explain what I did. I hope you get inspired by it.

My Zappa moustache is crocheted from natural (undyed) brown single-ply wool, which incidentally matches my hair color. It was easy to do : I chained until it was long enough to cover my upper lip and go down on both sides of my mouth. Then, I singled-crochet 2 rows. Holding the moustache-to-be over my face in the mirror, I decided where I wanted the angle to be. That happened to be 4 stitches from each ends. I slipped-stitched 4 stitches, skipped 2-3 stitches, and single-crocheted tightly so it would pull the end of the moustache at a right angle. I single-crocheted until I was 6-7 stitches from the other end of the moustache, skipped 2-3 stitches and slip-stitched tightly to form the other angle. The key here is to be symmetrical. I finished it my slip-stitching some more to make sure the angle will stay put and weaved in the ends.

Then, I made a square for the pinch. Soaked everything in water and blocked it overnight. You can felt it if you feel like it.

On the big day, I used regular scotch tape to adhere it to my face, but I think double side tape would have been better. I tried to eat soup while wearing it, and I tell you it’s a real challenge!

Here are some great hand crafted moustaches resources I took my inspiration from :

I went shopping at Chanel last week, not that I have the money to buy anything in there, but just out of curiosity. There was an elegant yet very simple pink...