One challenge when making a female robot is to make her look feminine even if she is square and bulky, like le robot. An obvious way to do that would be to make her pink. But I don’t like pink. It’s too girly of a color. I know lots of beautiful and feminine women who hardly ever wear pink. So what physical traits are typical of femininity?

I googled a bit about fembots, women and the like, and what is stereotypically feminine seems to be : hair, eyelashes, breasts, waist and curves. I probably won’t experiment too much with curves (nor waist) since I want the fembot to be a feminine replica of le robot, but the other traits will probably be implemented.

Oh, by the way, the idea of making a fembot with lots a features and buttons and flashing LEDs and switches is inspired by this photo that I’ve seen dozens of times in various contexts : 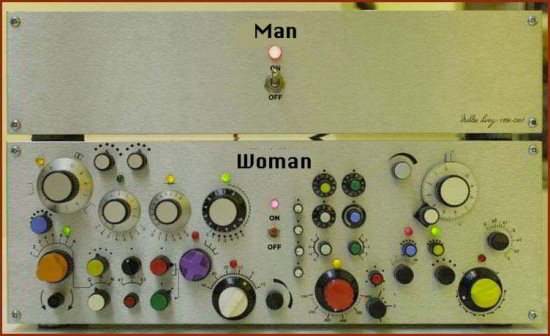